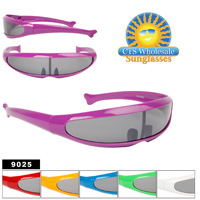 Looking for some eyewear that will really make you stand out from the crowd? How about these fun Devo Glasses? Take a step back in time to the '80's and shake it up a little with these crazy shades. With a unique concave single piece lens that wraps around, and bold coloring, you'll definitely turn heads. This style has been called many things from Trekkie, Robot to Devo sunglasses.

Devo, a band that has enjoyed decades of popularity, is famous for sardonic, possibly even derisive, ensembles. Many of their appearances are made in matching outfits that include odd eyewear with even odder headwear and clothing. All of which generates an artistic and expressive ensemble, that delivers a stronger impact when worn by all 5 members.

Between their look and sound Devo has achieved a very iconic status, with a cult following. In the early days of MTV, they received significant airplay with their "Whip It" video, shown below. Other popular hits from Devo include their Rolling Stones cover song "[I Can't Get No] Satisfaction", "What We Do", "Girl U Want", and "Jocko Homo" just to name a few. Originally formed as a sextet, with six members in 1972, Devo later became best known as a quintet consisting of brothers Mark & Robert Mothersbaugh, Gerald & Robert Casale, and Josh Freese. With two Roberts in the band lineup, they dubbed Robert Mothersbaugh "Bob 1" and Robert Casale "Bob 2".

The band's look is as expressive and variable as their sound. The Devo sound style has morphed between punk, art rock, post-punk and New Wave. Their best known hit "Whip It" was released in 1980, from the "Freedom Of Choice" Album, which had an almost strictly electronic sound. "Whip It" debuted on the Top 40 Billboard charts, with the title track "Freedom Of Choice" and "Girl U Want" were both big hits as well.

Devo released many other albums and as recently as 2012 was churning out new music, with their most recent single being titled "Don't Roof Rack Me, Bro (Seamus Unleashed) which was dedicated to Mitt Romney's dog Seamus. Relating to the incident in 1983 when Romney reportedly travelled 12 hours while Seamus rode inside a dog crate that, as the title implies, was strapped to the vehicle's roof rack.