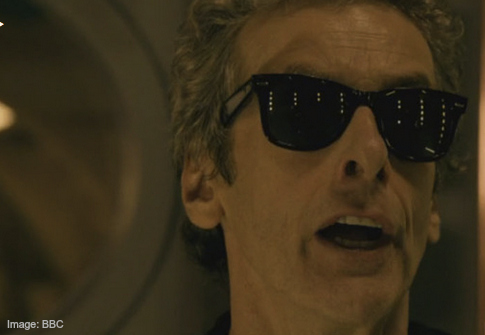 Back in August, I mentioned that Doctor Who’s trusty sonic screwdriver was to be replaced with a pair of sonic sunglasses. The decision by the show’s producers has been largely unpopular. And it now seems a U-turn is more than possible.

Are sonic sunglasses too much for the doctor?

Then the new Doctor Who season started. Fans saw that the sonic screwdriver had indeed been replaced with a pair of sonic sunglasses. It’s fair to say that many fans were unhappy. In fact, some Doctor Who fans have been in uproar over it, venting their anger on social media. It’s worth remembering that the sonic screwdriver has featured in Doctor Who for decades. (The show has been running in the UK since the 1960's).

Perhaps because of the fan’s backlash, Doctor Who “showrunner” Steven Moffat, was recently reported as saying that the sonic screwdriver could return.

He said: “I know some people are incredibly irate about it, and I’m sure the screwdriver will show up again someday.”

I expect that once the current story lines have been recorded and aired, the sonic screwdriver will return. The last thing any show wants, is to anger its most loyal fans and it seems the switch to sonic sunglasses was a step too far.