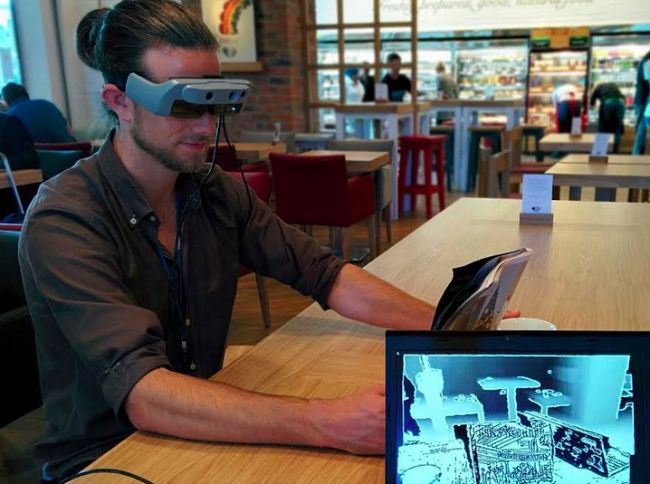 I have an inspirational sunglasses related story for you today.

You may recall that I wrote recently about technology, which helped blind people identify objects and obstacles. That device sent a signal from camera-mounted smart sunglasses, decoded it and sent it to a sensor on the user’s tongue.

Today, news has reached me of a device being developed at Oxford University, which can help some blind people see things in a way never previously possible. The device is called SmartSpecs and is effective on around a third of legally blind people.

Legally blind? To be legally blind, someone’s vision needs to be 20/200 in their best eye, when wearing corrective lenses. It’s estimated that around 90% of blind people have some limited form of vision.

So how do they work? In brief, the prototype looks like a pair of slightly bulky, smart-sunglasses. They contain 3D cameras, which were originally designed for Microsoft’s XBOX. These cameras capture the scene the user is looking at and displays it on a screen, directly in front of the user’s eyes. The image is then manipulated, to make it easier for blind people to see. They do this by massively boosting the contrast of the image, so a very clear black and white scene is created. Any objects in the distance are removed, which de-clutters the image.

The end result is a new way for the user to see the world around them. The image the user sees is a little like a black and white cartoon. However, it’s a crisp image and this is what makes it so valuable.

Those who are suitable for the device, will be able to see facial expressions. They will also be better able to navigate their environment. For example, a coffee table that would be indistinguishable from a carpet, will now have clearly defined edges. The same is true of doorways, etc.

It’s wonderful to see the amazing work being done here, by Dr Stephen Hicks, the Oxford neuroscientist leading this exciting project. It adds to the optimism many of us have, that one day, technology will provide blind people with 20/20 vision.

This is why CTS Wholesale Sunglasses is here 365 days a year, to help retailers provide high quality products to their customers. If you're a retailer and you would like to know more, use the "contact" link at the bottom left of this page. We look forward to hearing from you.