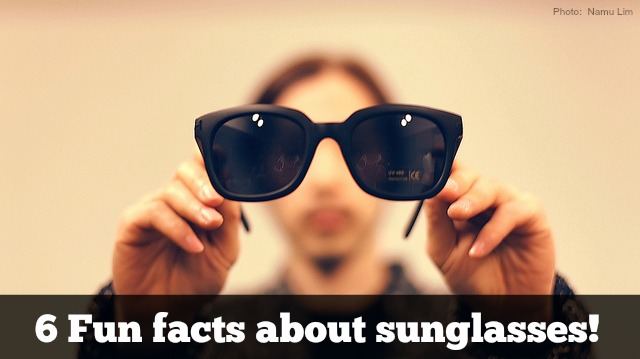 Sunglasses Fact One: Reg Dwight, better known to millions as Elton John, was once almost as well known for his sunglasses as he was for his chart-topping music. He is also a passionate collector of sunglasses and is rumored to have over a thousand pairs.

Sunglasses Fact Two:The legendary Aviator brand of sunglasses by Ray Ban, are true to their name. Unlike some names associated with sunglasses design, which have no connection to the actual use of the design, Aviators were originally used by pilots.

They were designed back in 1936 and launched as Ray Ban for Pilots. The quality and look of the design, combined with its exciting association to aviation has seen the design endure every since.

Sunglasses Fact Three: And on the subject of Aviator sunglasses, it wasn't a movie star who initially made the brand popular. No. It was none other than General Douglas MacArthur.

Sunglasses Fact Four: Remember how in the old cowboy movies, the good guys wore the white hats and the bad guys wore black hats? Well, in the movie The Matrix, sunglasses were used in a similar way.

Sunglasses Fact Five: Every 14 seconds, someone in America either loses or breaks their sunglasses. That's not the same person, you understand! :)

Sunglasses Fact Six: It seems that when we're not breaking or losing our sunglasses, we have an insatiable appetite for buying them. A pair of sunglasses are bought on ebay alone, every 90 seconds. Of course, the smartest people buy THEIR sunglasses from CTS Wholesale Sunglasses.

Remember, if you are a retailer who either stocks sunglasses or wants to become a stockist, CTS Wholesale Sunglasses are here to help. Just click here to get in touch. We look forward to hearing from you!