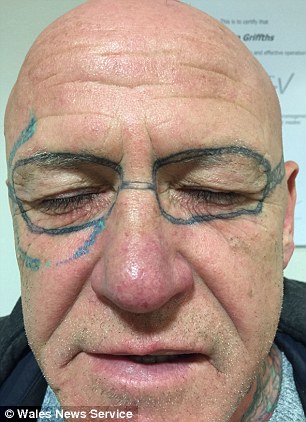 I’m pretty sure this is the weirdest sunglasses story I will ever share with you. That’s quite some statement, considering some of the stories I’ve shared so far.

A night to remember

So, you’ve heard all the stories of guys at bachelor parties, getting chained to railings or finding themselves in a weird location, with no idea what happened. Well, in Wales, UK, a guy woke up after attending a bachelor party (what they call a stag party), to find someone had used a Sharpie to draw a pair of Ray-ban’s onto his face.

Except, that wasn’t a Sharpie.

As you can see from the photo above, the tattoo looks a little bizarre, to say the very least. On the side of his head, the arms of the sunglasses have also been tattooed on, with “Ray-ban” inscribed onto the tattooed frame. Apparently, he got extremely drunk and paid to have the tattoo as the result of a dare, from one of his fellow bachelor party revellers.

The story only came to light this week, when the guy, who’s in his 50’s, had already undergone 2 years’ worth of laser surgery, to have the tattoo removed. He’s still a little sensitive about it and has asked people not to reveal his name.

CTS Wholesale Sunglasses are passionate about sunglasses. However, I don’t foresee any of the team taking their passion to quite that extreme.