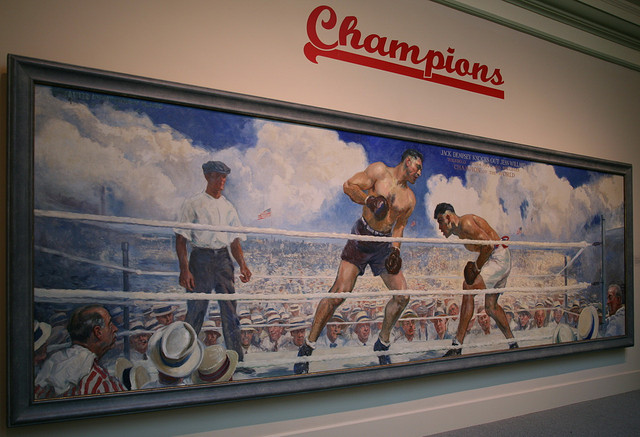 One of the most high profile places to see people in sunglasses isn't in sunlight. It isn't even when a movie star is on the red carpet at an awards ceremony, as very few stars wear them at these evening events.

So, what am I referring to? I'm talking about a small rectangle, which is often watched by tens of millions of people. A boxing ring!

Immediately following a gruelling fight, it's very common to see a boxer presented with sunglasses by his (or her) corner men. This is not to shield the fighter's eyes from the glare of the overhead ring lights.

Why use sunglasses to hide a boxer's eyes?

There are a number of reasons why the fighter wants sunglasses following a fight, if their eyes are in bad shape.

Firstly, the bruising often becomes a lot more pronounced in the minutes and hours following a fight. Fighters like to hide their wounds because it is often seen as an indication that they took a lot of punishment during the fight. This is actually incorrect. I boxed and sparred for over 20 years and have seen fighters dominate a fight, only for a relatively minor clash of heads to leave the victor looking like he'd taken a lot of punishment.

Secondly, boxers are proud people. We don't like to look battered, especially when our loved ones hug us, congratulate or commiserate us after a fight. Sunglasses provide an element of protection, not just for the fighter's ego but for the feelings of those who care about him.

Finally, the eyes are often called the windows to the soul. When a boxer is interviewed following a televised bout, it's easier for them to look cool, calm and collected if their eyes are covered. This is something I mentioned in a recent post about the image created for The Terminator movies. Boxers are often asked awkward questions by the media immediately following a fight, Sunglasses can help hide the fighters inner feelings as he responds to the questions.

By the way, during a professional boxing match, the only protection allowed above the boxer's waist is a mouth protector / gum shield.