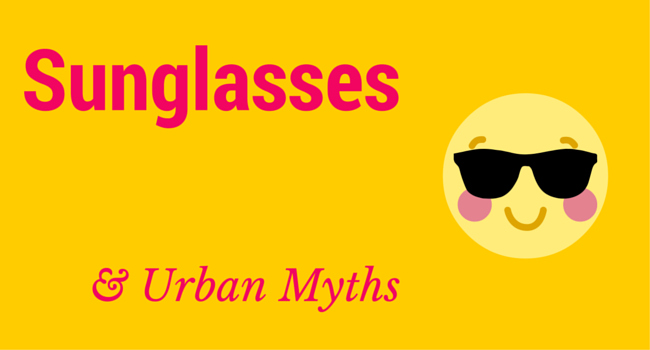 Every industry has its fair share of urban myths and the sunglasses industry is no exception.

Urban myths are those stories we hear repeated over and over, which are untrue. Maybe the most famous example is that of Walt Disney. The urban myth says that Disney arranged for his body to be cryogenically frozen after his death. Despite the fact that Disney was cremated in 1966, this myth is still repeated today.

There are 2 sunglasses stories, which are still being shared, even though they are fake.

1. The bank robber and the little old lady

The first is about a bank robbery. The story goes like this. A man runs into a bank and demands that the bank teller fills his bag with money. He notices a small blind lady innocently standing in line.

She looks at him through her black sunglasses and he jokingly says; “this is one witness who won’t be able to identify me” — before removing his mask to smile at her. The story goes that the little old lady was not blind. She was the grandmother of a scientist, and was wearing the latest smart sunglasses. Video of the robber was being sent direct to the police, who caught the robber in under an hour.

That story was actually from a student's English assignment, which his proud mother read out on a talk radio show.

The second story is about the late, great Roy Orbison. During Roy Orbison’s life, there were 2 urban myths regarding why he always wore his trademark sunglasses when in public.

The first myth was that he was an albino, who dyed his hair black and wore sunglasses, in order to protect his eyes from the light and avoid being identified as an albino. The second myth was that Orbison was almost blind. Neither of these stories are correct.

Orbison’s eyesight was indeed poor and he needed strong prescription lenses. However, he was fine without needing to wear sunglasses. The reason Orbison wore his trademark dark sunglasses was down to an incident early in his career. He was due to perform and realized he’d left his prescription glasses behind him. The only other pair of prescription glasses he had available, were his sunglasses. So, he wore them on stage and the look became a permanent part of his on-stage image.