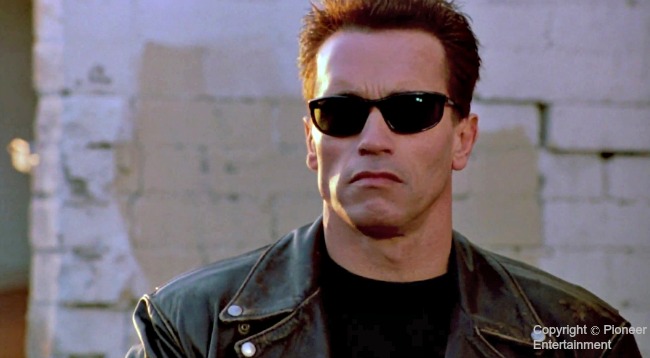 In this look at sunglasses in the movies, we pay homage to the classic Terminator movies.

In order for the Terminator character to look convincing when handling guns, Schwarzenegger worked every day for a month with guns. He practised weapon assembly and disassembly, eventually being able to strip a gun and reassemble it while wearing a blind fold! He wanted to be able to do this without thinking -- so it was an automatic process... like a robot!

Schwarzenegger also practised firing weapons every day at a shooting range. He learned how to fire them without blinking and how to reload them without looking. Clearly, the same meticulous attention to detail and practise that made him a legendary body builder, was brought to his acting.

What sunglasses did the Terminator wear?

According to the movie's producer, Van Ling, Schwarzenegger wore Gargoyles in the original movie and Oakleys in the second. There seems to be some debate about the sunglasses he wore in later movies.

2015 will see the 5th Terminator movie, with Arnold Schwarzenegger appearing in the same role, 31 years apart! That's quite an achievement for a regular acting role. However, to play an action hero over three decades is testimony to Schwarzenegger's incredible physical condition.