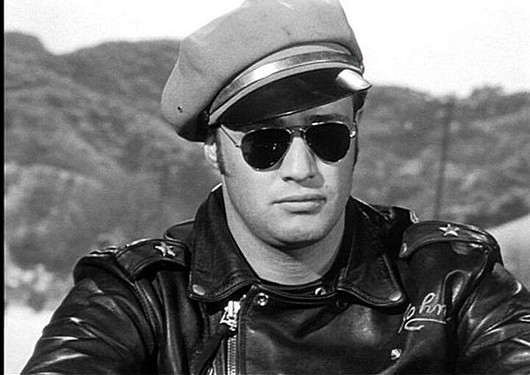 In today's look at sunglasses in the movies, I'm going back a long way into modern movie history. It's the 1953 cult classic, The Wild One -- starring Marlon Brando.

In all the previous movies I have written about, sunglasses featured prominently. They were worn regularly throughout the movie or worn during key parts of the movie.

However, The Wild One is very different!

How sunglasses created a lasting image

Although we associate Brando's character with the Ray Ban Aviator's in the above photo, he didn't wear them that often in the movie. He wears them in the opening credits and occasionally during the movie. Yet, the impact created by that look was so powerful, that people came a way from the movie with Brando's image in their mind, wearing the Aviators.

The inclusion of Ray Ban Aviators in the movie was accurate. That's to say, many of the motorcycle gangs of the time included people who had recently left the military. Ray Bans were issued to certain service personnel and as a result, a lot of guys who joined the motorcycle gangs wore Aviators. This became a part of the look and others copied it. Soon, the look was copied by moviegoers too, who were attracted to Brando's rebellious movie image. Once again, life imitated art.

The Wild One is a great example of a movie, which realized the impact of sunglasses as a powerful, visual way to help build the image of a character. The fact that we still associate Brando's character with sunglasses over 60 years later, despite him wearing them only occasionally in the movie, is testimony to the impact they created.