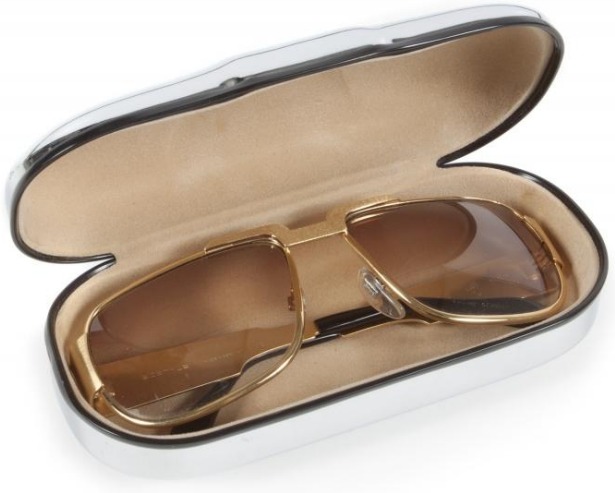 Sunglasses have become one of the most sought after forms of memorabilia. It makes sense. By owning the sunglasses of your rock idol or favorite movie star, you not only own something they once used, you get to look at the world directly through the same lens as that person did. For someone who has a deep affinity with a celebrity, that's an extremely powerful attraction.

As a result, there's a huge market for the sunglasses of famous people. The more famous the person, the more valuable the item. If that person is deceased, the value increases massively, as there is obviously a limited supply of artefacts.

How much for a pair of Elvis Presley's sunglasses?

The sunglasses above were sold for almost $30000. Why? It's said that they were owned by Elvis Presley. The story has it that Elvis left the sunglasses behind him after a recording session in 1973. One of the musicians saw them and picked them up with the intention of returning them to Elvis. However, for some reason he wasn't able to do that so he decided to keep them. Years later, he decided to auction the sunglasses.

How did the buyer know that the sunglasses were owned and worn by Elvis? Well, they were sold along with 3 photos of Elvis wearing sunglasses that looked the same or similar to those on sale. There was also 2 letters of authenticity from Elvis memorabilia experts. Plus, there was the word of the guy selling the glasses, who I assume was also able to prove he was a musician who worked where Elvis recorded.

In fairness, there isn't a great deal more anyone can do, to prove that someone wore a pair of sunglasses over 40 years ago.

If you are, you need to consider in advance, how much proof you need in order to feel comfortable making the purchase.

So, when hunting for a pair of celebrity sunglasses you have to make sure that the threshold of proof is good enough for you. Clearly, this is usually the case, as auctioned items sell regularly for hundreds of times their normal value, because people believe the story behind the item.