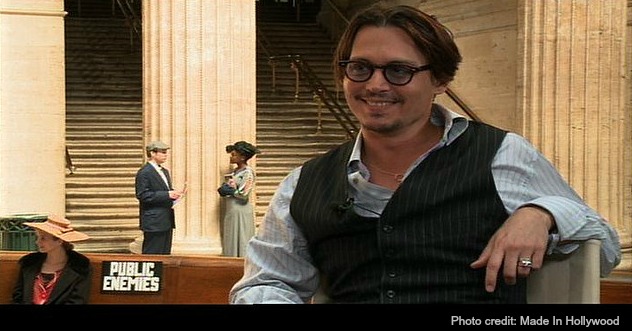 Johnny Depp is one of the most popular movie stars in the world. He attracts the media everywhere he goes, with photographers eager to get as many photos of him as possible.

One thing you will surely have noticed if you see Depp in the pages of your favorite magazine, is that he's seldom photographed off screen without sunglasses. Back in 2013, Rolling Stone magazine interviewed Depp to celebrate the star's 50th birthday. Yes, he's over 50 now!

During the Rolling Stone interview, Depp explained why he's always seen in sunglasses. Just as was the case with Bono from U2, the answer wasn't related to vanity. [I wrote recently about Bono's disclosure that he suffers from glycoma - you can read it here].

Everything is just very, very blurry!

Depp explained that he has suffered with a serious eye problem since early childhood; "everything is just very, very blurry". His left eye has almost no vision and can't be corrected by prescription lenses. To use Depp's own words, he's "as blind as a bat" in his left eye. His right eye is near-sighted and requires a prescription lens.

As Rolling Stone put it: "So whenever he's acting – unless he's lucky enough to be in a scene where his character wears sunglasses – Depp can see only a few inches away from his face."

Writing this reminded me how fortunate those of us are, who have relatively good eyesight. It's one of those things we often, wrongly, take for granted.